FRIENDSを使った英会話練習課題集 > 英語つぶやきマラソン > What was the most difficult problem in your life and how did you get over it?
2021/03/06 英語つぶやきマラソン《お題》
この《お題》を見て、湧いてくることを英語でつぶやけ！

What was the most difficult problem in your life and how did you get over it?

What was it about? Work? Study? Test? Sport? Family? Friend? People? Money?...

I had worked with a terrible guy for over 12 years. He has a crazy look in eyes. He always frowns, looks just like a demon, gets mad and yells at us soon. He never listens to people. the most troublesome thing is that He always makes a mistake to listen to us.
Actually when I worked with him,We could never been able to tell him what we meant. No matter what we said, he just misunderstood us, got mad and yelled at us. He always stood on the opposite side to us.And, of course, he always had trouble with our customers. In the end, the customers were steadily moving away.
Even if everyone said “It’s ridiculous!”, he always carried on the stupid way. So he ended up making our company got failure. Then sales of our company had been reduced to 1/3.
In last February, he suddenly said to us “our sales are getting worse so I want you to quit this job”. We wanted to tell him “you were the one who had to get out of here now! you made our company failure!” But we had no choice except following him. Because, …this is the point of our tragedy, unfortunately, he was the “president” of our company. And he could have fired us but he had never got fired. Because He was “the son of our former president”. The former president said to us “I’m sorry. he is really stupid”. But he didn’t have any power to do something for it anymore.
This was awful! but ,you know what,I think I know why. Only doctors would be able to say, he has Asperger’s Syndrome. Anyway I managed to get a better job than that now.

Ross: Oh, no, no, it’s not so much bothering to her. Ursula was the one who got in trouble.

Chandler: She was not going to get money for it!

Phoebe: Off course! The company paid it for “Phoebe Buffay”, not Ursula. So I took it! It makes sense! 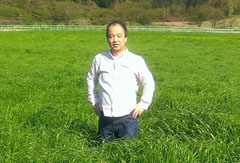